Sometimes you see patterns. I see a few with regard to some of the software players that are often considered part of a past era in IT. Let’s take a look at Oracle and see where convergence will take us. 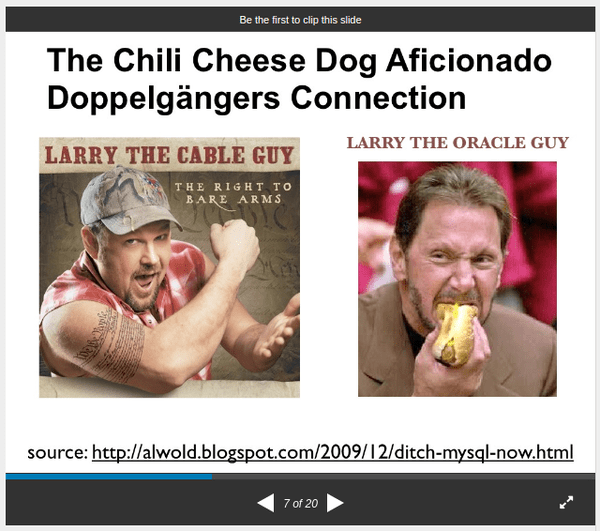 From my 2009 Ignight Raleigh Presentation: The Redneck’s Guide to Silicon Valley 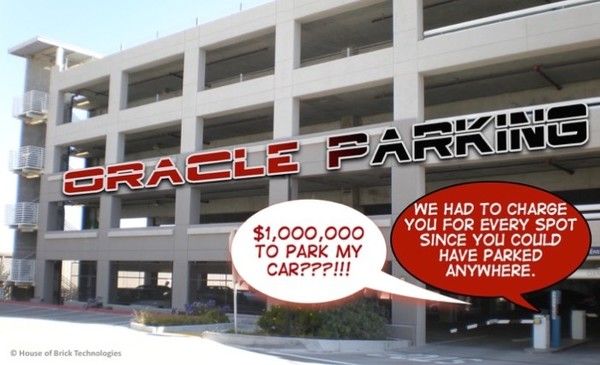 Oracle License is an anagram for Lies Concealer… 🤔 https://t.co/0FVzZYyesg

Anagrams are fun. Sometimes an anagram works on multiple levels. I’ll play a bit of advocacy of a devious nature in a moment if you’ll stay with me for a few more data points to consider.

It’s like that old saying… “A picture is worth a thousand active core elements or named users based solely upon what the market will bear” https://t.co/3VeylDUZhP

Okay, technically there are more than just cores or users to content with but you get the gist…

Sometimes a new take on an old theme comes back into focus. Here, the folks at VMware are breathing new life into the oldie but goody of the Oracle Parking Deck.

Now, before we get to the next part, I’d like to set aside time to praise a few elements of strategery on the part of Oracle. Stay with me here.

“Oracle would rather sell you a $5M system than a $3k switch. That’s how the appliance market works.” #GartnerDC

Still one of my favorite sessions ever at a Gartner event.

I blogged about the creation of an appliance by Oracle many many years ago and the impact it would have. It was the dawn of Exadata in 2008.

Convergence was upon us all in the IT world. My background in telecommunications also told me that there would very likely be a feisty time for many of the companies that had yet to be combined.

That’s what made Oracle interesting to watch. Their M&A teams would go out and just grab the companies that supported entire industry ecosystems.

Jay Cuthrell of the VCE Office of the CTO dropped by theCUBE at the recently concluded Oracle OpenWorld 2013 conference to share his take on databases, DBAs …

Over the next 5 years since Exadata was announced a series of M&A events added to the history of Oracle. 2013 was an interesting year for Oracle and the M&A continued into 2016.

Few M&A teams impress me as much as the ones at @Oracle. Just think about it. Right? http://t.co/aaZuSWXfsm

The sheer pace of M&A activity by Oracle in telecom is mesmerizing #oow13 see also https://t.co/bXKGCvgX3z

Imagine being in telecom (or a niche area of cloud services) and waking up one day to realize that one company has almost cornered the market on much of the software and hardware used to deliver a significant amount of your business critical infrastructure underpinning. Really. Oracle M&A has had quite a run.

The shift to DI may come more at the expense of HCI systems than HCI appliances. DI systems will likely appear to be a variation of CI concepts but combined with HCI elements.

This is what makes pricing models for software so interesting. For the first time, the speed of how infrastructure and the systems that provide it will be moving very very fast. 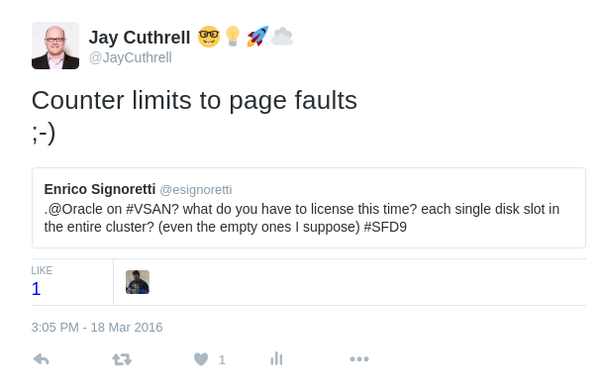 Will the licensing math become related to the number of page faults?

Perhaps, when considering pricing models, it would be wise for any ISV or full stack company to avoid “punching your customer in the face” as Chad Sakac most recently reminded us all in the IT industry. Don’t be that kind of company, right?

So, perhaps the growth in cloud initiatives and what appears to be increasingly complex software licensing schemes are related. Perhaps the goal of the ISV side of Oracle is to evolve into the very same cloud that was once openly tongue in cheek mocked by their leadership just one year after the Exadata was announced. Times change. Perhaps Oracle will to.

9.21.09 Larry Ellison on cloud computing, with Ed Zander at the Churchill Club

Convergence will be the assumption of a fully commensurate model of consumptive patterns that is fully beneficial to the customer and provider of technology. To achieve this modality, service pricing models, software pricing models, disaggregated infrastructure, and consumer grade commerce experiences will have to be placed into the same judicious amalgams that created everything from Exadata to Vblock to the humble but growing VxRail.

Convergence is the natural progression of how the IT industry will evolve to provide a truly commensurate model. Let’s see how 2017 rewards the companies that embrace and extend that vision to their customers.

Now… does anyone remember where we parked?

On a semi-final note – I’m ending my experiment with Revue with this update. 12 issues in 12 days! Thank you Revnue team!! But… I miss my workflow. I’ll even consider coming back to the Revue platform when I’ve figured out how (or have options) to keep content in revision control for my own workflow which I detailed previously. In the mean time, I’ve got some copying and pasting to do! 😁

Terminal Multiplex & Emoji in Space I tried to use ProductHunt in this post. It didn't go as planned. I’ll dredge up a tweet from my old…