I started this post ten days ago. The year since my last work related update has been packed with integration activity, organizational changes, epiphanies, and a fair amount of travel.

I’ve gone through the patent filing process before at other companies but never had a grant. Until now.

As of this October update, I’ve been with Dell EMC (Converged) for seven years. As I described last year, the only reminders and references to VCE are few and far between. As an aside, I still wonder if my Acadia email address will stop working at some point. 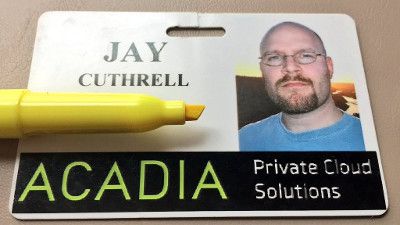 The steady progression towards a Dell EMC experience has been a testament to the execution of the Dell EMC integration planning. Each week seems to bring a new update on the work that our CIO and IT group have completed and continue to complete. It’s taken time, but the VCE references, and eventually EMC references, gave way to Dell EMC references.

While the past year has not been as travel intensive for me as in prior years (90% travel), there were some highlights and welcome changes. Of the 52 weeks since my last October update, I appear to have traveled ~30 of those weeks. So, 60-70% travel seems about right.

Highlights from the past 12 months include industry events such as Splunk .conf, Garther Data Center Conference, HIMMS, VMworld, Gartner Symposium ITXPO, Dell Technologies IQT Day, and 2017 Dell Analyst Day. Additionally, each month brought multiple Executive Briefings in Hopkinton, Santa Clara and in Round Rock. So, the best part is I was able to speak, conduct panels, and meet with lots of customers, partners, analysts, and global team members.

If you read this far, maybe you are curious about the trends for meetings and the topics.

Did meetings discuss what Dell Technologies is? Yes.

Did meetings discuss how the transition to Dell EMC is going? Yes.

Did other topics shift from what you thought they would be? Yes.

Converged Infrastructure (CI) is now about as provocative as the status quo reference architectures it displaced several years ago. CI “just works” and has fewer objections to overcome in IT landscapes where LAN and SAN connected compute/storage paradigms persist.

The next most requested topic? Hybrid cloud -on- HCI. Basically, an operating model delivered on a software defined basis was the topic that shifted to a PaaS storyline.

Eventually, software defined operations will emerge as a topic or simply be an enabler to the next topic. I’m not sure though. The problem space is not solved. In general, this topic will require HCI penetration and growth to raise the base assumptions of automation within connecting fabrics.

To recap the top 5 topics:

HCI grew faster than many industry watchers expected. However, HCI (like CI before it) alone is not enough to move an industry forward outside lowest levels of IT infrastructure.

Instead, forward progress in the higher IT stack will require greater adoption of PaaS and modern workforce organizational models as a path to writing better and more secure software more reliably more of the time. So… Hope springboots eternal?

Previously, I was ambiguous about what Dell EMC would be working on for customers… that I could write about on my blog. As it turns out, that has not changed.

Dell EMC is part of Dell Technologies and the Marketing organization creates far more content than I ever could alone on a personal blog. As a result, 99% of what I create or share now is “behind the firewall” and that is absolutely fine.

So, until next time… see you next year. 😉

Perhaps you've heard a phrase regarding conscious choice and decisive action.  Perhaps, in the days before maps were built into your mobile…